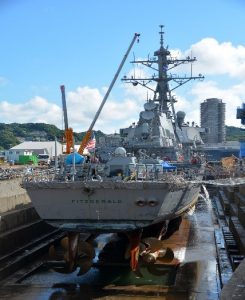 Chaplain responds to worst US Naval Disaster since USS Cole

“The first time I stepped foot on a ship, (one of my recently assigned ships) the USS Fitzgerald, DDG-62, I was lowered by hoist from a helicopter. We could not land, as the ship was listing at 5 degrees.  I was one of four people sent to the damaged vessel, along with the Deputy Commodore, Damage Control Chief, and a Medical Doctor.  300 Sailors were fighting to keep the guided missile destroyer afloat.  For the 15-hour ride back, I did non-stop counseling.  The first thing I did was conduct a ‘spiritual triage.’ I spoke with those in or near the damaged area, those who closed the hatch to the flooding compartment, and then those who were standing watch when it happened. Later, I asked the command, ‘Who do you want me to see?’  A bow to stern head-count revealed seven Sailors missing. “

The collision with ACX Crystal, a larger Philippine container ship, occurred on June 17th, about 56 nautical miles (64 miles) southwest of the USS Fitzgerald’s homeport of Yokosuka, Japan. Chaplain Stephens, continued: “When the ship finally made it back to port, the community had rallied at the pier.  Families provided food for the famished crew, and additional chaplains and counsellors stood by.  It was a base-wide response.”  Jonathan took a long breath.  “Family members of the missing crew members were frantic.  Divers went down into the flooded area, and found seven Sailors drowned in the berthing area.”

The next morning, Chaplain Stephens showed up in his dress blues for casualty operations ministry duties to formally notify and console grieving family members.  “The next ten days were a blur.  How do you explain the unexplainable to loved ones whose whole world has changed?  It’s not normal. So much damage was done; to the ship, the crew, and most significantly, to the Families of those who perished.  Everyone worked together; the base chaplains, casualty teams, the command, family support; all the while we were grieving, together.”  When I asked about the dignified transfer of remains back to the Sailors’ home towns, he said, “The Air Force team as Yakota Air Base handled the sendoff.  Air Force chaplains conducted the Dignified Transfer of the flag-draped coffins on the ‘Angel Flight’ cargo plane.  They did a great job supporting us.”

I then asked Jonathan about the local memorial service for the seven lost Sailors: “We had great command support for the base-wide service; from the Commodore and Senior Chaplain down. The Navy flew the Families out.  Five of seven Sailors’ Families came, along with Admirals from one to four stars.  The news media was kept out of the service, with only the Armed Forces Network allowed to cover and film the solemn event.  I thought for sure the command would have the senior command chaplain officiate the service, but Commander David Cline, senior chaplain, put me up front.  He and other base chaplains provided all the backup and support of this major event for over 750 people.”

His words were aired at the Washington, D.C. Memorial Service and provided healing and comfort to Sailors, Families, and the Nation. His message at the Memorial Service focused on the act of giving displayed by the seven Sailors.  He said, “So much has been given…But I want to say, for those of us grieving…at the end of the day, what’s given to us is not what is going to heal us.  True healing doesn’t come from what we receive; true healing comes from what we choose to give for others.”

When I asked Jonathan how he felt undertaking this difficult ceremony, he replied, “Lord!  I felt so honored to play a role in the work He’s doing during this great tragedy.” 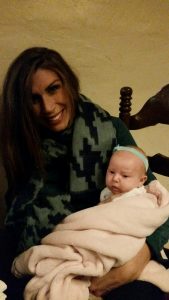 Now a few weeks after the fact, I asked Jonathan how he and his young Family were doing? “Well, we weren’t even settled in quarters when the tragedy occurred. I had to leave Melissa and six-month old Louisa to fly to the ship.  Fortunately, we had just acquired a car, so I loaded as much of our baggage into it before I took off, ‘Go-bag’ in hand.  That next day, Melissa had to handle the arrival of our household goods, plus care for our baby.  I remember the last thing she said to me, as I left, ‘Tell me what to pray for.’  We have a saying in the Navy, ‘The whole Family serves!’  Because of her faith and commitment to my ministry, I could fully engage in my duties without worry, or concern.  She is a role model for military spouses in the time of intense crisis.”

Jonathan continued, “As for me, I have no routine yet. It was truly a “baptism by fire” at this new assignment.  This major tragedy has gone on for six weeks.  It’s been tough; no time to establish local community connections, a real struggle.”

When I asked Jonathan how people in our churches could pray, he gave me this list:

I was glad to finally get a call from Chaplain Stephens from Japan. I took notes as fast as I could, so I could share his experience with you our faithful supporters of chaplaincy.  I urge you to lift Jonathan, Melissa, and baby Louisa to God in your prayers.  As you do that, remember the other 189 chaplains serving across the 54 United States, Territories, Commonwealth and the District of Columbia, AND spread around the globe in combat zones, sailing hostile waters, and often flying in dangerous skies.

For more stories describing the ministries of CBAmerica chaplains, go to www.cbamerica.org/chaplaincy.  If interested in learning what it takes to be endorsed for chaplaincy ministry, contact Andy Meverden, Director of Chaplaincy at chapandy@cbamerica.org.