Chaplain Andy writes: “Chaplain Gerry Fox has served Military, Veterans and Family members of the Southern California VA Healthcare System for many years. He graduated from the US Military Academy at West Point in 1967, and spent 8 years as an infantry officer. Following that he served 20 years with Overseas Servicemen’s Services Centers (Cadence Int’l). He became an Army Reserve Chaplain in 1989 and served 15 years, the last five which were full time. All that experience prepared him for ministry to Veterans and their families. I was encouraged by his biannual ministry report, and want to share it with you.” 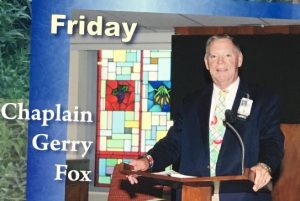 Chaplain Fox: “I was so encouraged with a post-op patient named Mike. He was located in the Community Living Center recovering from a knee replacement surgery. He mentioned that the surgery had gone well and mentioned how thankful he was that a chaplain had prayed for him. His inference was that he needed someone like a chaplain to pray on his behalf. I explained to him that if he had a relationship with God through Jesus Christ, he could go directly to God in prayer even when a chaplain or minister were not available.

“Recently I have been encouraged by more open discussion with a patient whom I have seen sporadically over a few years. A few years ago he adamantly insisted on being in the status of not wanting to see or have visits from a chaplain.”

If interested in reading more stories of God’s amazing work in and through our CBAmerica chaplains, go to www.cbamerica.org/category/chaplaincy. For information on endorsement for chaplaincy, contact Andy Meverden, Director of Chaplaincy at chapandy@cbamerica.org.