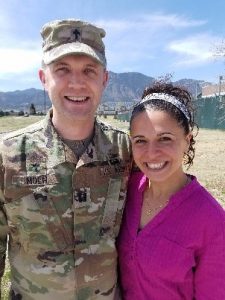 Effective military chaplains are flexible, adaptable, and creative.  Rather than being the main drivers in establishing unit culture and activities, they are often placed in a reactive/responsive position, while they “roll with the punches,” and “hurry up and wait!”  Chaplain Dan and Sasha Moen’s recent experience illustrates this.  Originally scheduled to deploy to the Pacific, recent world events put that on hold, until “higher up” got a new mission, which finally came.  Following is an example of how one Army family handles chaotic deployment circumstances, with creativity and grace.

“We’ve been preparing for our deployment to Germany for 7 1/2 months! Sasha was asked to be president of PWOC (Protestant Women of the Chapel) and we’ve been working with our Squadron leadership to establish a FRG (Family Readiness Group). 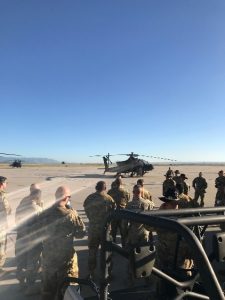 Chapel Next* is experiencing major transitions – most of the Division is deployed, so attendance has dropped. In addition, the current space we are using is an old Battalion headquarters. The new SFAB (Security Force Assistance Brigade) units will be moving into our space so we are getting bumped to the Middle School on Post. We are trying to move prior to my deployment. It will feel like a church plant ministry.

Recently, I conducted a “blessing of the birds” as our pilots flew all our Apaches (Army attack helicopters) to the port in Texas for transport to Germany. It was a great turn-out of about 50 Soldiers!  See attached pictures!

Dan and Sasha ask you to pray for the following:

In April, I drove down to Ft Carson to visit with Chaplain Moen’s command team – the whole team! In closing, the Brigade Commander – an Apache attack helicopter pilot — asked me to pray, not only for his Soldiers and their Families, but also “our enemies,” as their Air Cavalry Unit prepared to deploy. I did. Immediately following, I enjoyed lunch with Dan and his wife, Sasha, at the Post Exchange food court. Sasha was recently selected to lead the Protestant Women of the Chapel (PWOC) on base. Pray for them on deployment; both in key positions of ministry leadership on “The Mountain Post.”

Pray for Dan and Sasha Moen, during this next phase of life and ministry, along with CBAmerica’s other 195 chaplains (military and civilian). For more stories of chaplain life and ministry, go to http://cbamerica.org/category/chaplaincy/.  To inquire about endorsement for a wide variety of chaplaincy ministries email Director of Chaplaincy, Andy Meverden, at chapandy@cbamerica.com.

Notes: *Chapel Next is the Army’s version of Contemporary Chapel Services with a modern focus on serving the younger generation of Soldiers and their Families.  Like many US churches, they have a multi-instrument band with vocalists, casual environment, and practical, biblical messages with family-oriented support ministries for children (AWANA), youth (Club Beyond), single-Soldier and couples Bible Studies.