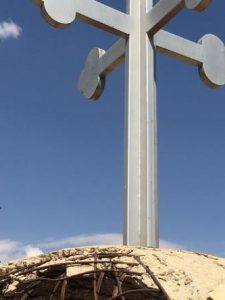 Chaplain Andy writes: CBAmerica military chaplains constantly deploy around the world. Air Force chaplains typically deploy to an air base, Army chaplains to Army bases and Forward Operating Bases, and Navy chaplains deploy to Navy bases and air stations or ride big ships on the oceans.  So, one would expect a Navy Reserve chaplain to deploy to a base with Navy or US Marines.  But not this chaplain.  Chaplain Nick Dewhurst, with a background with Sailors (Sea Bees – Naval Construction Battalion) and US Marines, took a different path.  Following is his surprising year-end update: 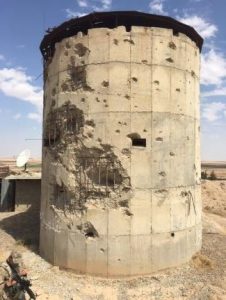 We arrived safely in Syria and hit the ground running.  We were embedded with the U.S. Army, so it was an adventure learning their culture.  I’ve heard too many “Hooahs” for my own good.  We initially started our ministry with a small “chaplain store”* and work area.  It was functional, but we saw areas for improvement to better the lives of the Soldiers here.  Throughout the month we began visiting Soldiers in our guard towers and built relationships with them by bringing coffee and snacks (Twinkies)!  We got to know them well and enjoyed working with a great group of guys from the Mississippi Army National Guard. 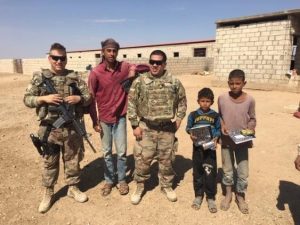 My RP (Religious Program Specialist) and I were able to do a small sight-seeing tour of our area with the local SDF (Syrian Defense Force) commander. He told us of areas where he fought ISIS for several days straight with diminishing food and Ammo.  He’s a great person.  I have enjoyed sharing tea and meals with him.  We ministered to his people by sharing with them much needed boots and toiletries.  We were also able to give gifts to the local Syrian children. 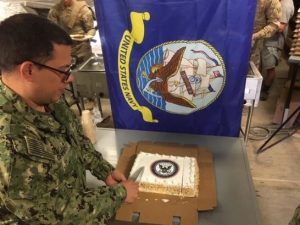 We thoroughly enjoyed making life better for those on deployment. One of the main tasks was managing the insane amount of Care Packages that came to the base. My RP handled the management of the “chapel store.” This was an awesome tool for ministry as it brought people into the store for a great many conversations.  It was such a joy to be able to put smiles on people’s faces during their austere deployment. We actively sought to meet the needs and desires of folks.  The personal touch really helped us engage the troops.

During our time here, we also have had a great time at our Chapel Fire Pit. We’d have s’mores and conversation and we constantly had 20-25 people show up and hang out with us on a weekly basis. We even got to celebrate the Navy’s birthday (October 13) with a cake. Since myself and my RP were the “oldest and youngest (and only) Sailors” we cut the cake. 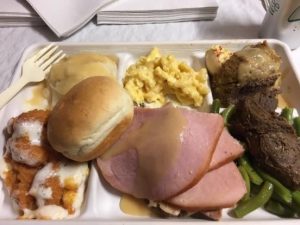 For fun we decided to do a “capture the flag” event. This was one of the most successful events we did. As a chaplain, we constantly reached out to everyone that came in to us, or to those we would meet during our “deck-plating” (Yes, it’s a Navy term ) It was awesome to hear that this event was made famous through the country of Syria. 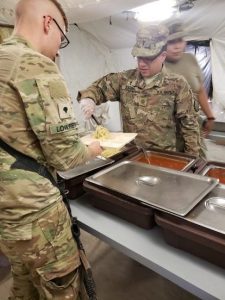 My RP and I had a chance to convoy to various bases around country and hold services in remote locations. As I was going around to people introducing myself, a soldier says, “I remember you! I played capture the flag at your base.” That is one of many compliments we have received on our work out here. I’ve told our chapel attendees many times that it is so important to be the “hands and feet of Christ,” as you may be the only Bible some people ever read. I think it is so true as a chaplain. The Gospel conversations, the counseling sessions, and the friendships have changed me for life!  We also enjoyed serving food for Thanksgiving and eating the wonderful food prepared by our DFAC (Dining Facility) 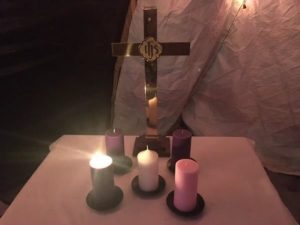 We began celebrating Advent at the chapel. We had messages on Hope, Love, Joy and Peace and shared how Immanuel brought those things with Him at His coming. We did multiple chapel services with communion in December. The people obviously appreciated it! One of the sad things about December was that we had a lot of people rotate out. 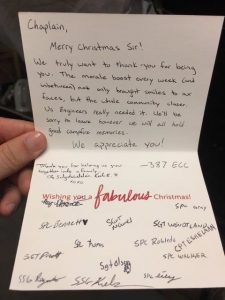 When our Engineer Battalion left, we held a Good-Bye party for them. They presented us with a nice card. 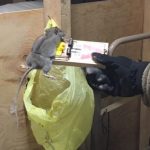 P.S. We heard this intruder one evening. Thankfully he was captured. He was as big as my RP’s hand!

*Chapel Store: This ministry team took over the task of receiving, storing and distributing Care Package contents (goodies) to area Troops. Like the typical American GI, they also shared with the destitute local population.  Not only did they use what they had to brighten the day of their servicemembers, but they brought rays of hope and joy to the oppressed people of Syria.  This is another example of the impact of sending Care Packages to our chaplains in support of their ministry to the Troops!

For more stories by and about Chaplains, go to www.cbamerica.org/chaplaincy. To inquire about endorsement for military and civilian chaplaincy, email Andy Meverden, Director of Chaplaincy at chapandy@cbamerica.org.

One Reply to “Oh, the Places That They Go: Navy Reserve Chaplain Ministers in Unexpected Places”