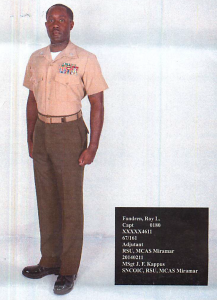 That’s probably what the Chief Petty Officer called out, as the strapping new officer with five rows of ribbons entered the building.  From a distance, the color and prominence of his 14 awards indicated that an experienced officer was approaching.  But as he got closer, the Chief relaxed when he saw the silver cross on his lapel opposite his rank.  I’m sure Chaplain Roy Fondren, a former US Marine line officer, now dressed in the Navy tan uniform, stuck out his hand and offered a firm handshake and a broad smile.  I can imagine everyone in the office watching as he was led to his office at his new, first assignment at Naval Air Station at Whiting Field in Milton, Florida.  Roy, his wife, Megan (herself for former Marine Staff Sergeant with 12 years active duty) and children, settled into their new lodging, as Chaplain Roy familiarized himself with his new assignment.  When asked to share his greatest blessing in his first ministry report, Roy wrote:

“Being used to lead three people to Christ. One in a counseling session and two at Chapel. In addition to the salvations, just the simple fact that when people come into my office, in a sense, they walk into the Gospel Den!  Because, by God’s grace, there’s NO WAY they’re going to leave without getting the Gospel message during their counseling! The big fear is Chaplain’s not being able to say “Jesus” at the end of a public prayer…but you know what, the day-to-day interactions and Light Shining of Christ I do is more effective than a singular prayer for a retirement that ends in Jesus name…when reality is, most people are just thinking about refreshments after the prayer. The GOSPEL IS GETTING OUT!!”

When asked what his prayer concerns were, his response was equally enthusiastic: “My ability to not be swallowed in Ministry. Meaning, I LOVE THIS STUFF, yet with 2400 people on this base and two Chaplains, the work is ABUNDANT!  So, it’s hard to NOT work late hours…which reduces family time.  So my prayer request would be for a healthy balance.”

In his first few weeks he was able to perform: “4 Worship Services, 1 Bible Study, and report 3 people receiving Christ.”  Oh wait, but that’s not all, when I replied to his report with affirmation and a word of caution with regards to balance between ministry and family, he almost immediately responded back to me:

“SIR!!  NO LIE!!!  ANOTHER Fella JUST came to Christ via Individual Counseling! PLUS, I connected him IMMEDIATELY to a local church here for discipleship!  This stuff…is hard to articulate!  I’m dumbfounded!   I’M CRAZY JUICED to be used by Him for the change of lives in our military folks!!  That is 7 salvations in the last 8 weeks, OH MY GOODNESS!!  Yes, Satan is Pi**ed and I’m glad!  I am diligently hungry to keep the Armor on while GOING HARD for the Gospel!  I have a similar prayer of yours but I’ll disclaim (I’m going to copy yours now)… God bless you sir!!”

Rejoice with, and pray for Chaplain Roy and Megan Fondren, as they start their chaplain career on a high note of praise, along with the other 12 CBAmerica Navy Chaplains on bases, hospitals, and vessels at sea. They are part of the 96 military and 65 civilian chaplains serving under CBAmerica endorsement.

For more information on CBAmerica Chaplaincy, including what’s entailed to become an endorsed chaplain, federal or civilian, contact Chaplain Andy Meverden at chapandy@cbmarica.org and visit www.cbamerica.org/chaplaincy for more info and chaplain stories.

NOTE: Chaplaincy is not for the feint-hearted, but sometimes, like Chaplain Roy, you just have to jump and shout for joy!