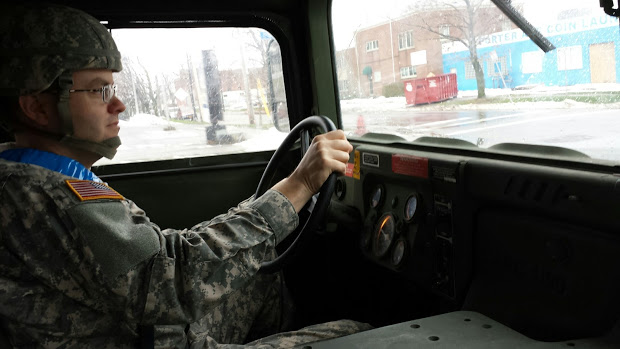 Tim Miller was commissioned as a chaplain in September of 2014, after several years in the Chaplain Candidate (Seminarian) program. One of his first assignments as a brand new chaplain of the New York Army National Guard came unexpectedly with a snow storm in Buffalo. He explained that his unit was scheduled for deployment, but at the last minute, it was called off. This sudden change in plans evokes many emotions in a soldier. It is a time of turmoil, as many of them had quit their jobs, moved their families and made other preparations of being gone for a year.

“With joy and sadness my unit’s deployment to Afghanistan was canceled. Soldiers felt relief and others were upset. During this time, the City of Buffalo experienced 7.5 feet of snow and my Engineers, along with myself were called up for one week prior to Thanksgiving. During this time, I was able to hold several services and provide crisis intervention for several Soldiers. Because of the uniqueness of my role within the Engineers, I became the Joint Task Force Chaplain for this mission and provided administrative and logistical oversight for other Chaplains on the same mission. At the end of the mission, the Administrative Chaplain from National Guard Bureau contacted me to create a storyboard for the Buffalo mission. I was told that the storyboard slide was briefed to the Chief of Staff of the Army! The greatest blessing was the honor of providing support to the people of Buffalo, NY.”

It should be noted that CH (1LT) Matthew Laun also participated in this snowstorm, and is also a CB America NY ARNG Chaplain.

Andy Meverden, CBA’s new Director of Chaplaincy observes, When natural and man-caused disasters strike across the nation, and civilian response is overwhelmed, local National Guard units are called up to provide “Defense Support to Civil Authorities” (DSCA).  Faced at times with horrible devastation, Guardsmen and women, likewise can be overwhelmed in their search, rescue and recovery efforts. During such times State National Guard (Army and Air) chaplains team up to provide religious and emotional support to America’s original “Home Team.*” Whenever a major disaster strikes, stop and pray for the 22 CBAmerica endorsed National Guard chaplains spread across our nation, along with the 100 other military chaplains, and 80 civilian chaplains in unique ministry situations, “reaching those others can’t… or won’t!”

*Since 1636, starting in the Massachusetts Bay Colony, volunteer Militias have supported the people of their States in times of crisis.  From the beginning, chaplains have accompanied these units in the field in times of natural and man-made disasters, and war.[/text_output][/vc_column][/vc_row]