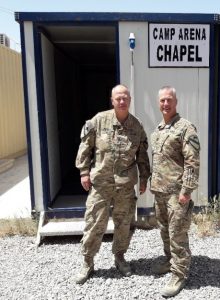 On a recent trip visiting CBAmerica chaplains in Texas and Oklahoma, I passed a Modular Home Dealer with the sign: “Tiny Houses!” The tiny house movement, a social trend of downsize living space in America, has hit the modern battlefield! Troops deployed to Iraq, Afghanistan, and elsewhere know. Not only are troops housed in Containerized Housing Units, better known as “CHUs,” one National Guard Combat Sustainment Support Battalion (CSSB) Unit in Afghanistan is applying the trend to provide tiny chapels to remote outposts and forward operating bases (FOB).

Chaplain Scott Noyes, deployed with the North Dakota Army National Guard 136th CSSB sent me a storyboard depicting the use of containerized or “Tiny Chapels.” In it he describes the “mission” of the Tiny Chapels; “To provide a place for religious services and a sacred space for all service members, Afghan Nationals, and DoD civilians in order to accommodate for the free exercise of religion.” During Battlefield Circulation (BFC) around Afghanistan, Chaplain Noyes often used available rooms to hold religious activities and counsel Soldiers and quickly recognized the need for sacred space.

Once established and furnished with religious materials, there was an immediate response by FOB residents who began using these containers and rooms for Bible studies, prayer meetings, and simply the use for silent prayer and reflection. 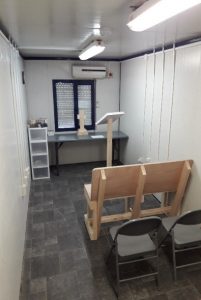 The primary role of a military chaplain is to “ensure the free exercise of religion” among military members and, by necessity, civilian support personnel accompanying the troops. Chaplains “provide or provide for” the religious needs of all in their assigned unit and area of operation. That includes people of a religion other than that of the assigned chaplain. The term used is “pluralism,” which is the recognition and accommodation of other faith groups in the same operational and living space.

From my reading of history, the concept of “religious tolerance” began in Colonial America when “dissenters,” like Baptists, Congregationalists, Presbyterians, and other non-state religious “sects,” appealed for recognition and respect from the Church of England in the New World. That toleration spread to the acceptance of Jewish colonists, Roman Catholics, and others. It was reflected in George Washington’s Continental Army where all chaplains were Protestants…except one Roman Catholic priest from Canada! Since then, US military chapels have accommodated Protestants, Catholics, Jews, and other emerging religions.   These “tiny chapels,” provide that communal “sacred space” in Afghanistan, and elsewhere. It’s an example that needs to be seen. 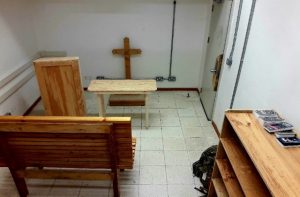 Given the large, dispersed area of operation, Chaplain Noyes and his assistant SSG Rick Bryant, circulate among troops in remote locations like FOB Arena, where they have tiny chapels that they keep stocked with Bibles, devotionals, DVDs and other appropriate religious materials. These tiny chapels, provide a quiet, shrapnel-resistant place during the day or night, where troops can come for reflection and prayer. And, when the chaplain visits, they gather for counseling, worship and prayer.

In one of the outlying FOBs, Dahlke, the chapel (below) is in the Mayor’s cell* building, indicating the value of religion in daily life.

Pray for Chaplain Noyes and Staff Sergeant Bryant, as they minister to the troops in their area of operation. Pray for safe travel, good health, hearts open to the leading of God’s Spirit, and opportunities to show the love and Good News of Jesus Christ in a dangerous place. Pray also, for their families back home, for spouses missing their deployed service members, and for kids acting out, in large part due to the absence of their deployed parent. Above all, pray for positive communication and healthy and wholesome return, reunion, and reintegration from deployment.

And, pray for “big things” to happen in these “tiny chapels!”

*The Mayor’s Cell deals with infrastructure and support services like handling trash, tracking the population on the FOB, and employing local workers. In addition, various types of work orders are processed through this office, including the work order to construct the chapel depicted above.

For more interesting stories of ministry by CBAmerica chaplains, go to www.cbamerica.org/chaplaincy. For information on what it takes to become a chaplain, contact Andy Meverden, Director of Chaplaincy, at chapandy@cbamerica.org