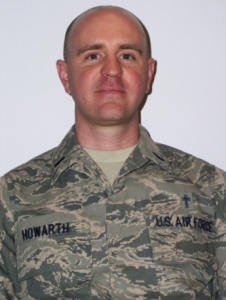 Men and women in the Army National Guard too often face civilian obstacles that challenge them personally, physically and spiritually.

They struggle with marital and financial challenges, as parents, in civilian jobs and more, all which affect military readiness. In 2010, Ian Howarth, ADP ’09, made a decision to help these soldiers and airmen through serving God and his country as a military chaplain.

He is now a captain in the Idaho Air National Guard’s 124th Fighter Wing at Gowen Field just outside of Boise. Although he joined the Oregon Army National Guard in 2010, it was a decision he and his wife, Allyson, had talked about since 2004.

“I was a youth leader and met a pastor going through the chaplaincy,” he said. “It struck me how much of an impact a chaplain has on the soldiers and airmen we serve.” Although Howarth started his adult life with a desire to become a teacher, and did so for several years, he said he also had a strong desire to work in ministry.

Howarth’s long-time friend, military retiree and fellow Corban alumnus Steve Fink, ADP ’09, had many open and honest conversations with him about military life and the role of chaplains within it.

“He’s really taken on that chaplaincy role,” Fink said. “He has the ability to deal with stressful, personal situations and putting people at ease.”

Being a chaplain isn’t all the media makes it out to be, Howarth said. One example he gave is the misconception that Christian chaplains can’t pray in the name of Jesus Christ.

“It’s a weird dynamic,” he said. “You work for the federal government and you are in the military, but you represent your faith. I’ve never been in a position where I have to compromise my faith to keep my job.” He is endorsed by the Conservative Baptists Association (CBA) and said the military allows him to follow the organization’s tenants when serving military members.

However, Howarth also noted that the role of a chaplain isn’t centered on evangelism, but relationships. He builds camaraderie with those around him and uses his personal experiences to help them through many different challenges.

“I haven’t lost sight of where they come from,” he said. “I may not have the same military experience as they do, but I know what it is like to be a civilian. I know what it means to live paycheck to paycheck. I recognize the turmoil that happens in their marriages and with their kids and I am someone they can confide in.” Fink said soldiers are attracted to Howarth’s character and personality.

“He’s down to earth,” Fink said. “He’s got a phenomenal sense of humor. His heart is for kids and families. He is someone you can hang out with and feel comfortable to speak to. He listens and can put himself in places where the troops need him to be.”

Although he loves his role and believes there are Corban School of Ministry students who would make good military chaplains, he said there are important considerations. One, military chaplains need to be able to work with people from all faith groups including Catholics, Orthodox, Latter Day Saints, Muslims, Buddhists, Hindus, and others. He also said that while Christian chaplains aren’t required to pray the rosary or offer Muslim prayers, they must be willing to help a soldier find someone who can meet their religious needs.

“It’s all about building relationships,” Howarth said. “My mission is to serve airmen and soldiers. There really is no other ministry like it.”