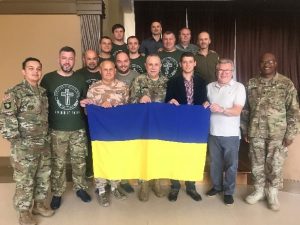 By Chaplain Randy Brandt, US Army, Joint Base Lewis-McChord, WA, and Andy Meverden

Director of Chaplaincy, Andy Meverden, writes: “War is hell on earth. The human cost includes not only the physical injury, and death of combatants, but also the lingering impact of its related emotional and spiritual trauma on returning warfighters, their families and loved ones. The current conflict between Russia and the Ukraine is producing many shattered lives, on the front lines and back at home. Part of the support the US provides our Ukrainian allies includes semi-official and volunteer training of chaplains. Once again, I was surprised by the recent report of one of our senior chaplains.” 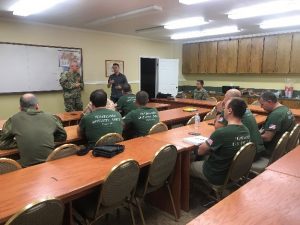 “I had the privilege of being the guest speaker for a group of 9 Ukrainian Military Chaplains back in August. What a joy it was to meet with and encourage these men, all of whom are volunteers (not paid military chaplains like we have in our Army) who choose to go to the front lines and serve the Soldiers on the battlefield because of a calling from God and a love of the Lord that compels them. 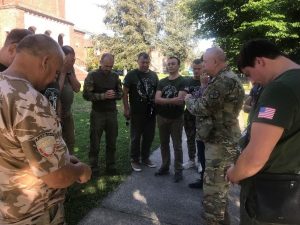 One of the guys was a Spetsnaz* soldier who fought in Afghanistan for the Russians and then became a special operations helicopter pilot prior to coming to the Lord and giving that all up to do the work of the ministry for the Lord in Ukraine. I heard lots of neat stories of service and sacrifice – some painful stories as well. Some of these men have lost family members during the invasion by Russian backed separatists in Donbas and Luhansk.

We had great fellowship and a chance to share testimonies of the great things God was doing in our lives and then I had the privilege to talk to them (through an interpreter) about Moral Injury and how the Local Ukrainian Churches can support and minister to the Soldiers and their families as they come back from war. We were hosted by a Ukrainian Christian Church and community near Seattle and were able to break bread with a traditional Ukrainian meal before coming back to JBLM (Joint Base Lewis-McChord) and providing a guided tour of our base museum and chapels.”

“Prior to the end of the age, Jesus said there would be many precursor signs, including “wars and rumors of wars” (Matthew 24:6). No matter what is going on around us, our mission is the same, and that mission is what Jesus says is a reliable predictor of the end times, “And this Gospel of the Kingdom will be proclaimed throughout the whole world as a testimony to all nations, and then the end will come” (Matthew 24:14).

Join me in praying for the Brandt family concerns and ministry, including continued, effective Gospel ministry by Chaplain Brandt, and our other 195 chaplains, military and civilian. Pray especially for those military chaplains deployed in support of combat operations in various locations, along with these volunteer Ukrainian chaplains sent by their local churches to minister on their front lines of conflict.”

Director’s Note: *Spetsnaz is an umbrella term for special forces in Russian.

For more stories of and by CBAmerica chaplains serving across the US and around the world, got to www.cbameria.org/chaplaincy. For an informational brochure on endorsement for chaplaincy under CBAmerica, contact Andy Meverden, Director of Chaplaincy at chapandy@cbamerica.org.