Skip to content
At the 2014 January Board meeting, Rev. Allen Russell informed the CBAmerica Board of Directors of his plans to retire from his position as the Director of Chaplaincy in mid-2015. A search team was selected with a goal of appointing a new Director by January 1, 2015.  This would allow Chaplain Russell the opportunity to train and mentor his replacement. By early summer Chaplain Andrew Meverden was unanimously approved by the board as the new Director of Chaplaincy.

Reverend Meverden then worked as Director of Church Relations for Partners International in San Jose, California. When he became a Chaplain in the US Army Reserve.  Following this experience, he served as Assistant Pastor of Ministry Development at Calvary (Baptist) Church in Los Gatos, California, and then as Senior Pastor of Galilee Baptist Church in Denver, Colorado. While pastoring this 106 year old congregation, Chaplain Meverden was called to active duty in Afghanistan, as chaplain of the Colorado Army National Guard Green Berets.

After serving in Kabul, Afghanistan as Chaplain of US Army Special Forces, Chaplain Meverden became a management and program analyst at Joint Forces Headquarters in Centennial, Colorado, while continuing his part-time Guard Chaplaincy. He has served since 2007 as Command and Fulltime support Chaplain at Joint Forces Headquarters, Colorado. It is from this position that Chaplain Meverden will retire on December 31, 2014.

Col. Meverden and his wife, Myra, live in Aurora Colorado. They have been married 8 years and have 7 children and 8 grandchildren. Chaplain Meverden’s broad military, parachurch, and pastoral experience will be a great compliment to the CBAmerica program that Al Russell has built over the last 21 years. 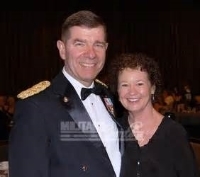