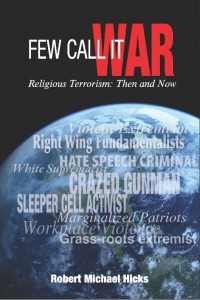 “Our political establishment is blind to religion as a significant player in our world today. Blinded by secularism and political correctness they have backed themselves into an ideological corner whereby they refuse to call religious terrorism what it is… war!”

Former USAF Chief of Chaplains Charles Baldwin writes, “At a time when political leaders are reluctant to talk about faith, Dr. Hicks opens our eyes to the truth about religious terrorism… a must read for those of all faiths, no faith, and evangelicals who love their country.”  Chaplain, Major General, Charles Baldwin, USAF (ret)

Available in hardcover and paperback at Amazon.com.